Financial Planning As A FamilyPersonal Finance

The Necessity of Alignment

Irreconcilable differences. It’s cited on nearly every court application seeking divorce. Sure it’s a boiler plate term, but it also tells us that the vast majority of marriages end in large part because two people have lost alignment. Everything else that comes along with the divorce is often just a symptom of that loss.

Divorce is expensive and can easily derail the best laid financial plans. Court costs, lawyers fee’s, everybody involved is getting wealthy……except the people that are getting divorced.

Most people care about alignment and are willing to invest the time and money required to maintain it. At least when it comes to our vehicles.

Misalignment can cause a vehicle to pull right/left, sometimes significantly, and unevenly wear the tire tread increasing the odds of a blowout or loss of traction. All of which creates a safety hazard not just for the occupants of the vehicle, but also other road users.

Theres definitely motivation to take care of your vehicle. Failure to do so can have dramatically life changing impacts.

But isnt it arguably just as important to obtain and sustain alignment with our spouse/partner. Divorce can be equally as life changing for everyone involved, particularly if kids are part of the picture. So with so much at stake, why do we give such little consideration to alignment in our relationship? And why do people consistently find themselves so far off track from their spouse that they are citing irreconcilable differences?

It’s likely because so many of us fail to look at our relationship in a logical fashion. It’s an area of life where logic consistently goes out the window. We have high expectations that relationships are just supposed to work, and we lead with our hearts, rather than our heads.

But a sound relationship takes both emotion and logic. It also requires work, but it’s hard for anyone to invest that type of work if they aren’t getting a sufficient return of value on their investment. And it’s near impossible to get a return of value in the absence of alignment.

Alignment doesn’t mean finding someone who shares all your interests, opinions and dreams. BUT, it should be someone with whom you share common values and key life goals. After all, a relationship is a partnership, as much as two people will always have a vast array of strengths, interests, and opinions, a successful partnership hinges on the ability to work together towards common desires.

You can have the most caring, wonderful partner in the world, someone you respect, admire, and care deeply about, but if you don’t share an alignment of at least some key life goals, you’re going to lack a sense of fulfillment, contentment, and likely experience a whole lot more conflict.

Sometimes relationships start with both people seemingly aligned in their wants, but even a slight deviation in trajectory can look like this over time: 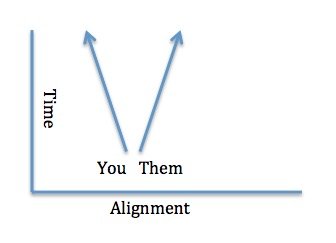 Or maybe at the beginning of your relationship your life goals seemingly increased in alignment, but then started to look like this: 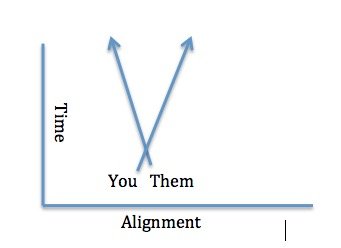 In both cases, although you may have started with a lot in common in terms of where you want to go in life, if left unchecked, small differences in experience and priorities over time can leave you headed in very different directions.

But alignment is a tricky topic in relationships. How much do you need for success both in your relationship and in life?

The reality is you won’t share every life goal with your partner, maybe running a marathon is high on their bucket list, but the only running you’ll contemplate is errands. But there are some pretty big areas where alignment, or the willingness to compromise to an aligned approach can make or break even the best of partnerships.

Having children, parenting those children, and finance are three such areas.

Having children is a really obvious one. Many people often have a clear stance on whether or not they want to have children, and this lack of alignment can usually be detected pretty early in a relationship. It may also be something that one or both parties are uncertain of, and work through overtime. But ultimately a need to see eye to eye on this topic is necessary. Forcing someone to have kid(s) when they don’t want to, or conversely robbing someone of the opportunity to have kid(s) is a recipe for future resentment and regret. A difference of opinion in this area generally falls into the category of a “deal breaker”. If you don’t think of it that way, you probably should.

Fortunately, unlike the children/no children decision, compromise can be reached much more easily in this arena. You can’t exactly have half a kid (although I’m sure someone somewhere is inventing a kid sharing app as we speak), but you can meet half way on parenting decisions.

But whatever your parenting style, it is incredibly important to reach a compromise in which both people can feel comfortable and engaged.

Which brings me to the third topic. Finance. It is one of the most important, and most ignored relationship topics by far. The way relationships are structured, people often don’t know the intricacies of their partners financial habits until both parties are well invested in the relationship. Sometimes not even until people have moved in together, are married, or have kids, do they start to learn exactly how the other person manages their money.

What a crazy way to approach something as impactful as finance! Sure, money isn’t everything, but how we manage our money does impact every facet of our lives. Differences in financial alignment inevitably create conflict in every aspect of life.

If left unchecked, that conflict will spill over into essential relationship territory like trust, mutual respect, and confidence in your partners judgement.

But whether your’s and your partners financial habits are polar opposite, or just slightly askew, they can be brought into alignment. But it requires each party to be willing to come to the table and recognize that a change needs to be made.

It’s only when one or both parties are unable or unwilling to compromise that differences are truly irreconcilable, and require some tough decisions to be made. Remaining in a relationship like that can wreak havoc on the happiness of all involved, and comes at the cost of missing out on the contentment an aligned relationship can produce.

But if you’re both willing to change some conflicting habits in order to achieve a shared end goal, or perhaps one person is willing to hand over control of the finances to the person who possesses more strengths or knowledge in that area, alignment can most certainly be achieved.

Whatever approach you apply, the most important piece is that you learn to recognize when your relationship requires re-alignment, or better yet, be proactive about it. This isn’t a set it and forget it method. Just like a car, regular check-up’s and assessment of your goals will help you maintain that alignment.

By investing time, and exercising diligence in your relationship, not only will you avoid misalignment and the resulting costs, your ability to progress towards your goals will increase exponentially, and so will your satisfaction and sense of teamwork within your relationship.

Why Your Social Threshold Matters

12 Rules of Life for Financial Freedom

The 4 Tendencies And Finance

Sometimes Doing Nothing is The Best Move

[…] go into business with – you’ve got a serious problem. Finance is the number one reason marriages crumble, so being able to openly discuss money, set mutual goals, challenge each other, and work together […]

[…] and life experience, but it also comes down to an overall measure of how much our life goals are aligned with our […]

[…] to protect against a relationship breakdown. Open communication, accountability, transparency, maintaining alignment of goals, all contribute to building and sustaining a strong […]

Tell us your thoughts? Cancel reply

Where to Start? Our 5 Steps to Financial Freedom

Step 1: How Do You Measure Your Wealth?

Step 4: Live Below Your Means

Step 5: The Side Hustle

I like to hang with my kiddos', play board games, drink coffee (and wine), visit my local library, and enjoy the beautiful outdoors of our home on the Canadian West Coast. I especially love to take on a wide range of DIY projects. So much so, my family says my theme song is "I'm Handy" by Weird Al.

Check out "Our Story" page and you'll find some links to posts that dive into who we are, and how we discovered our own version of Financial Freedom at just 33 & 34.

Hi - I'm Mike. I enjoy crushing debt, finding unique ways to increase our cash flow, hunting for our next investment opportunity, and researching the crap out of any purchase we might be considering.

I used to work for the government too, but now that I'm retired, I'm a poker aficionado, avid reader, ,3 4 time (back to back) Fantasy Hockey Champion, Craigslist selling ninja, and best of all, a full time dad.

To learn more about me, and how we pursued Financial Freedom with regular incomes, two kids, in a high cost of living city, check out my retirement update post on "Our Story" page.